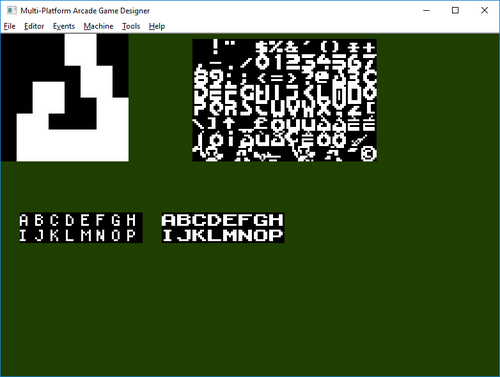 I've been busy playing with MPAGD, fixing bugs when I've encountered them and generally adding more functionality so an update is imminent.

There'll be a new option to import AGD/AGDX games from TAP files, new options in the script generator, imported games will now convert the CONTROLMENU command into equivalent code with a place where you can add a new redefine keys routine (AGD couldn't do that), a tool for automatically checking mistakes, 2 default fonts, numerous bug fixes and support for Acorn Electron, Dragon/Coco and Enterprise machines.

It's quite cool being able to just click the mouse and have MPAGD automatically generate code to have a drone sprite orbiting the player.  With a quick change to the script you could make it orbit an enemy sprite instead.  How about a boss sprite with several orbiting sprites firing at the player...?

Going forward I have a few ideas for sprite movement editors.  Sine waves, circular motion, maybe waypoints.  All possible thanks to the fact that MPAGD's sprites have local READ, DATA and RESTORE commands.  That said, don't worry too much about RESTORE, READ is cyclical on MPAGD so you don't get "E Out of DATA" errors like in Sinclair BASIC, it just loops automatically.

AGD was launched in 2008 and the 8-bit world took a few years to realise the potential of the program.  Retro gamers still haven't (yet) discovered the far greater potential of its successor.  We're in the early days folks and I'm just going to keep on improving this software.  My intention is that nothing else will come remotely close.  Bugs and design flaws in AGD can be fixed in MPAGD with each new update.  You want pushable blocks and moving platforms?  I'll write you a script.  Want to detect a collision between two sprites of the same type?  It can't be done in AGD but it can in MPAGD.

Keep checking back folks, there's more on the way...