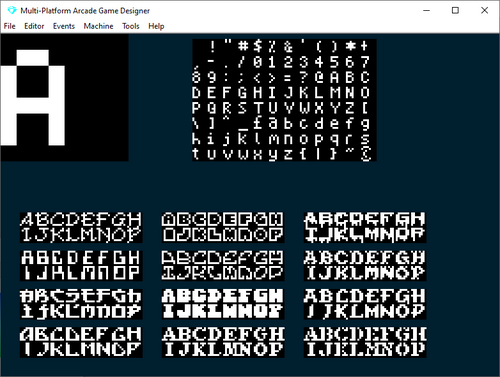 Just a quick update this time.

JL Tursan's build suite has been added for the MSX computers so now there's no need to have to download this separately and install all the files yourself.  However, you will still need to set up your own MSX emulator.  I've also added the VZ200, although there is no build suite included for this machine yet.

Damien Guard has supplied 12 fonts, which are built in to the editor.  I've also added more functionality to this editor so that characters can be selected or scrolled around using the keyboard.

There is a new F5 key to build a game, fire up an emulator and run it without the need to export source files.  To do this the tool creates its own default filenames, deleteme.agd and deleteme.asm.

AGD 4.8 games can be imported, as can 128K snapshots.  Fonts will now be imported from these games unless the CPC is selected.

There have been lots of bug fixes too, thanks to various users reporting faults.  I also spotted and fixed a couple of howlers too.  The documentation has also been updated.

You'll also find that the background colour can be customised in the mpagd.ini file, details are included in the documentation.

As ever, keep reporting bugs, making suggestions and sending me any interesting mods you make, I'll do my best to include them in the next release.  Meanwhile, my next challenge will be to write some colour graphics editors for the 6847 video display generator.  Wish me luck...

Each zip file is a self-contained version of the tool so all you need is the newest one.  Create a directory without space names in the path and unzip the tool there.  Then fire up WinAGD.exe and you should be up and running.  The manual is in the Docs subdirectory and there is an example game project in the ExampleProjects directory

No idea what the 6847 generator is, lol. But best of luck with the utility :) I'd love C64 support as well. Not that I have gone beyond the Spectrum yet. I'm loving the program so far.